To the north-east of the Forum the Insula of the Paintings was erected in the Hadrianic period (128-138 AD). This block consisted of a domus, the House of Jove and Ganymede (I,IV,2), and two medianum-apartments, the House of the Infant Bacchus (I,IV,3) and the House of the Paintings (I,IV,4). The houses are arranged in an L-shape around a garden. To the east of the garden is a row of shops (I,IV,1). The domus will be described here. The block was excavated partly by Rodolfo Lanciani in 1878, but mostly at the end of the First World War by Guido Calza and published in 1920.

The main entrance was on the west side (vestibule 28). There was a secondary entrance from the south, from Via di Diana (corridor 37). The rooms are arranged around an L-shaped corridor (29-30) and a courtyard without a roof (26). From the courtyard the garden could be accessed. At the level of the first upper floor the courtyard was surrounded by windows. The courtyard is flanked by two main, representative rooms (25 and 27). Both are two stories high, circa 6 metres. Room 27 is the largest room in the building: 6.75 x 8.75 metres. Most of the first upper floor belonged to the domus, and could be reached along a wooden staircase in room 41. An external staircase with travertine steps (38) led to the other stories. Room 36, on the corner of Via di Diana and Via dei Dipinti, was a shop. There was another small shop or little chapel on Via di Diana (39).

Plan of the houses in the block, Hadrianic phase.
Ground floor (top) and first floor (bottom).
North is to the left. DeLaine 1995, fig. 5,2.

In the 180's modifications took place. The door in the back of vestibule 37 was blocked, and shop 36 could now no longer be accessed from the domus. At the east end of corridor 29-30 a new, small room was created (31). Rooms 40 and 41 became independent shops. In the north part of 41 a new internal staircase was built (32). A wide passage in the south wall of courtyard 26 was blocked, as were the windows in the courtyard at the level of the first floor. The door between rooms 24 and 25 was blocked; room 24 was from now on only accessible through a new doorway in vestibule 28.

A dividing wall was erected in the garden, perhaps to block the Caseggiato dei Dolii (I,IV,5) from sight, a commercial establishment that was installed to the north in this period. Against the south side of the dividing wall a pseudo-aedicula was set, a small shrine with a marble statue of Jupiter (found in situ), with sceptre and eagle. In the niche two eagles, referring to Jupiter, were painted on a purple background. The lower part of the niche was closed off by some sort of door that left clear traces. The shrine has been assigned to the Severan period.

The floors of the rooms have black-and-white geometric mosaics, belonging to the first, Hadrianic phase. The walls were decorated with high-quality paintings. An important clue for the date is a graffito that mentions the month Commodus: VII Kal Commodas. Commodus had introduced a month called Commodus, August or perhaps September (after his death the original name was restored). Therefore the paintings cannot have been applied later than 192 AD, the year in which Commodus was killed. Unfortunately much paint that had been applied dry instead of 'al fresco' has disappeared. There were paintings throughout the building, but particularly noteworthy are those in main room 27, corridor 29, and room 33 that faces the courtyard.

In room 25 are solid red and yellow fields, separated by white columns. There were three vertical zones. A central panel contained several human figures, the flanking panels isolated figures, one perhaps a naked Hercules. These paintings are also on the blocked doorway in the west wall. In corridor 29-30 are two horizontal zones separated by a white band: the lower one red, the upper one yellow. With white, green and yellow paint tall, slender aediculae were depicted in the lower zone. They are connecte by garlands of leaves. Between the aediculae Calza saw an amorino, a winged head, a flying swan and a disc. Room 31, created later at the east end of the corridor, has a white background. There are two horizontal zones, the upper one continuing on the springing of the ceiling. The zones are separated by a double red band and contain tall, slender aediculae. Room 33 is a yellow room. It has two horizontal zones with stylized achitectural motifs, painted in white and red, and tiny landscapes (red, yellow, white and blue). Vegetation and a grey tragic mask can also be seen. The paintings were eventually covered with a very thin layer of whitewash.

In main room 27 the opposite walls have a similar lay-out. On all walls are three horizontal zones with panels of different sizes, some with human figures, others with archtectural elements. The lower zone imitates veined marble slabs. The middle zone is divided in two further zones with red and yellow panels. The badly preserved upper zone had panels between yellow architectural elements. The walls focus on the central part. Here, in the middle zone of both the north and the south wall, is a yellow panel with a single figure: Flora on the north wall, Dionysus on the south wall. These panels are flanked by red panels with partly curved sides, with vegetative candelabra supporting two peacocks. Below the yellow panels, still in the middle zone, were large red panels with mythological scenes, enclosed in a structure made of fluted Ionic columns, surmounted by two griffins. There are many more panels to the left and right, separated by Ionic columns. Some contain a porticus, others imitated marble slabs with a small head in the centre, still others with a bearded man wearing a mantle (a poet or philosopher) or a dancing woman.

The east wall also has a yellow panel in the centre of the middle zone, with a depiction of Venus Anadiomene. To the left and right are aediculae, and red and yellow panels, one with a sacrificing woman. In the centre of the lower part of the middle zone is a mythological scene. To the left is Venus or Hera, to the right are Ganymede and a (largely disappeared) Jupiter. The scene is flanked by multiple porticos, of different colours, the central one surmounted by griffins. To the left and right are male figures wearing a mantle, on a red background. The paintings continued on the west wall, on either side of the door leading to the internal courtyard.

The graffito mentioning the month Commodus is on the south wall of corridor 29. Today most scholars place the paintings of main room 27 in the reign of Commodus. The numerous other graffiti are all in the white room 31 and yellow room 33. The date of the paintings in these two rooms is disputed.

In the third century or later further modifications took place. The door connecting courtyard 26 and the garden was blocked. Against the outside of the blocking a basin was set. The garden was paved with basalt blocks, to the north and south of the dividing wall, and rooms were built on top. All this has now disappeared. Old excavation reports suggest that, perhaps, a bakery was installed at the far north end of the garden.

At the end of the third or in the first half of the fourth century the rooms of the block, the former garden and the street were covered with building rubbish and broken amphorae, reaching a height of 2-5 metres. A new level of beaten earth was created on top. On the level of the first floor new rooms were created with rough opus vittatum, and on the first floor doorways and windows were hacked out.

Originally the house must have been inhabited by a very wealthy Ostian, if we keep in mind what must have been the "political" significance of the location, so close to the Forum, and the price of the ground in this part of town. Calza suggests that the owner of the whole block lived here. We may think of a person like Gnaeus Sentius Felix, an exceptional person involved with almost every aspect of life in the city. The status of the owner is evident from the little courtyard, a private addition to the garden. A striking detail to consider is corridor 37, a secondary entrance leading directly from the Via di Diana to the interior of the house, along the corner shop. It suggests a great openness to the outside world, either with a commercial or social scope.

Graffiti suggest that at some point in time part of the ground floor was used for prostitution. A brothel at this location seems unlikely, rather we may think that the building had become a hotel, in the third century. One of the graffiti contains the phrase hic ad Callinicum, "here at Callinicus' place". Callinicus may have been the caretaker of the hotel. Several other graffiti were found in the building, showing people, gladiators, horses, and ships. The late-antique modifications in the garden (floors of basalt blocks, rooms) might have included a stable for the visitors.

The house seen from the south-west.
Model in the Museo della Civiltà Romana.

Via dei Dipinti, to the west of the block, seen from the south.
Photo: Klaus Heese.

Via di Diana, to the south of the block, seen from the west.
Photo: Parco Archeologico di Ostia.

Looking down towards Via di Diana in stairwell 38.
Photo: Jan Theo Bakker.

Reconstruction drawing of the garden, seen from the north-east.
Image: Gismondi 1923, fig. 28. 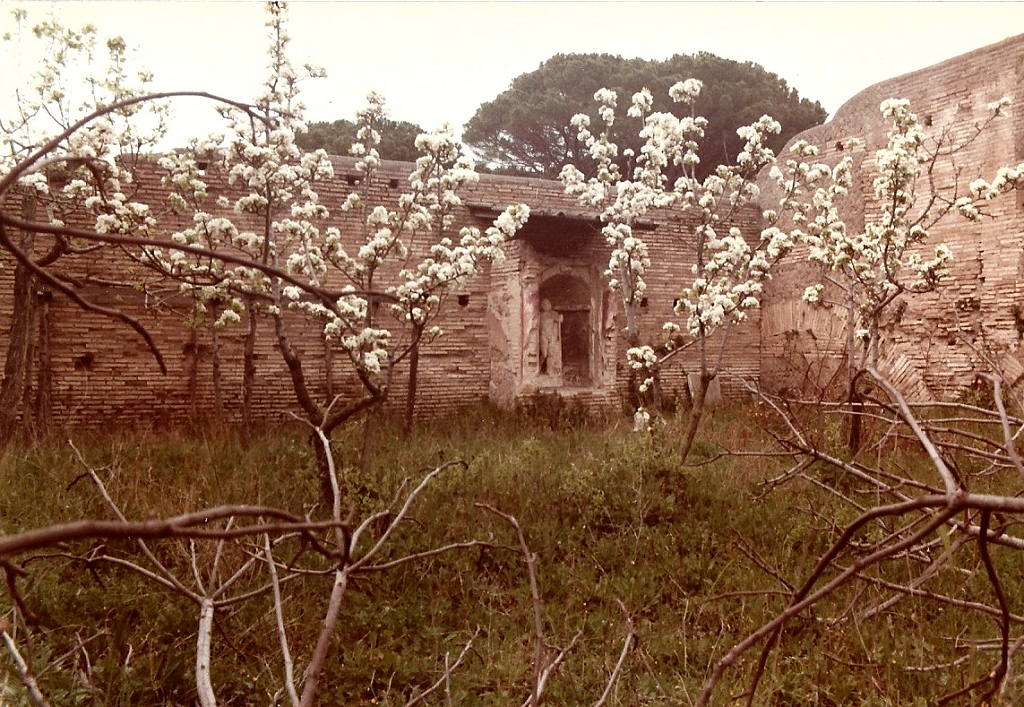 The garden seen from the south-west.
Photo: Jan Theo Bakker. 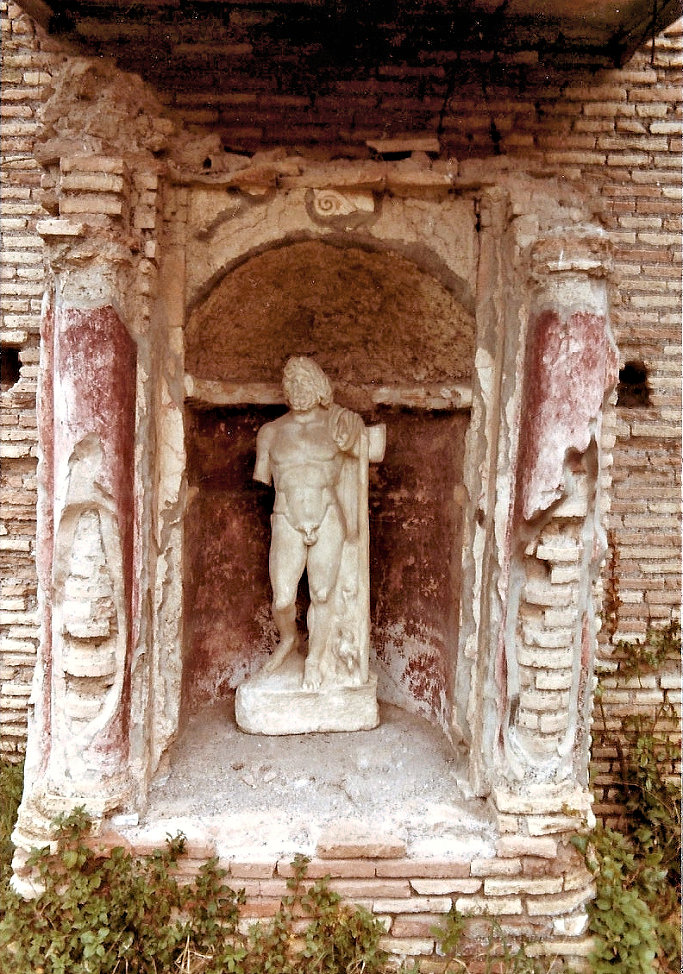 The pseudo-aediculae with the statue of Jupiter.
Photo: Jan Theo Bakker. 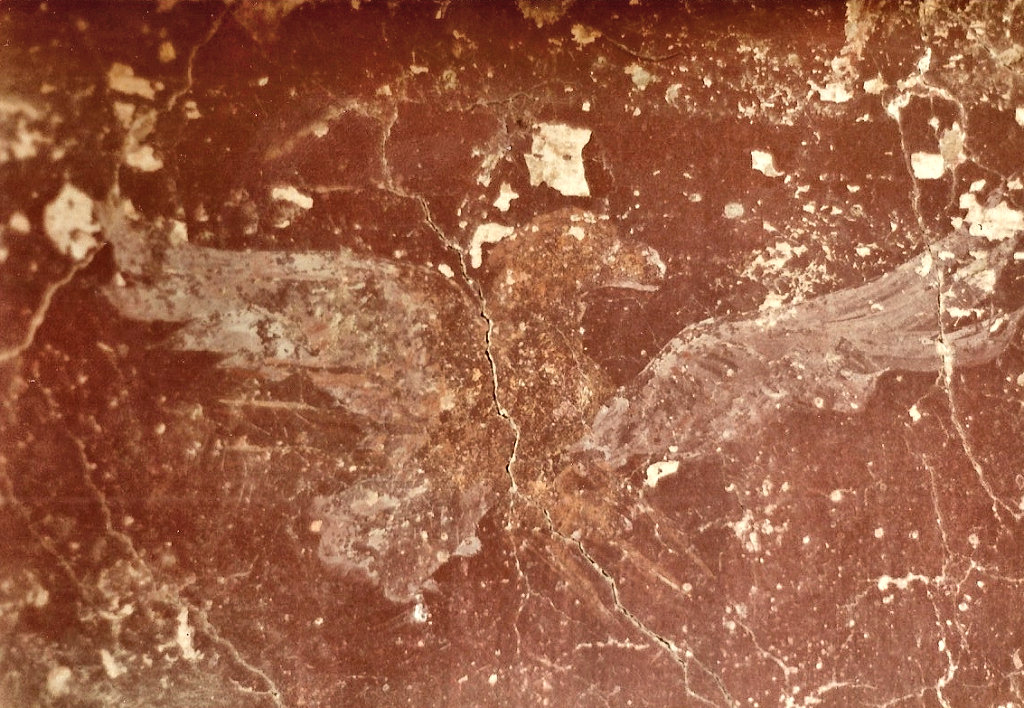 An eagle in the niche of the pseudo-aedicula.
Photo: Jan Theo Bakker. 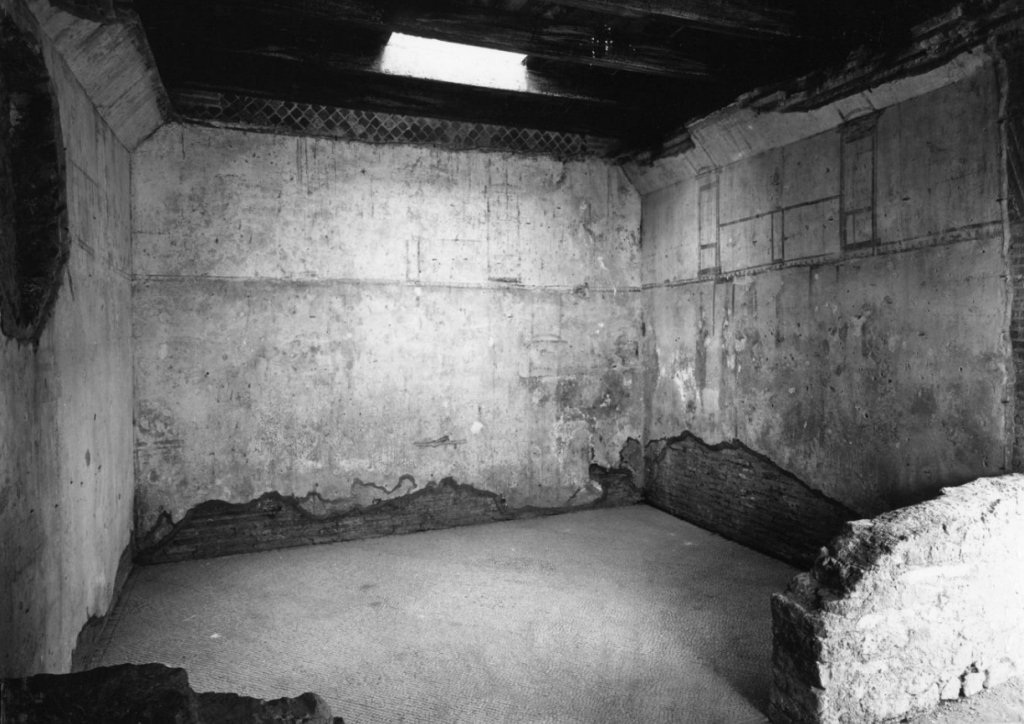